Mom is home safe and sound

MU SHUE, LILLY LU AND IRIS ARE SAFE WITH WITH THEIR MOM LAURA!!! WE ARE SO HAPPY!!! OUR PURRAYERS HAVE BEEN ANSWERED!!! WE HAVE TEARS IN OUR EYES WE ARE SO HAPPY FOR ALL OF THEM.
We are still purraying real hard that a miracle of all miracles happens and Mu Shue, Lilly Lu and Iris are found. They have been in our thoughts constantly. Poor Mom Laura. We wish we could help her in some way. 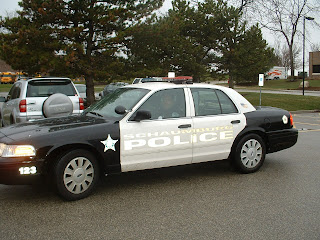 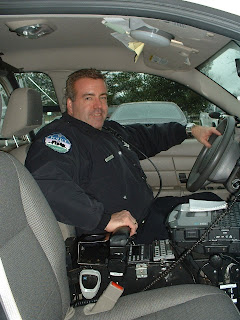 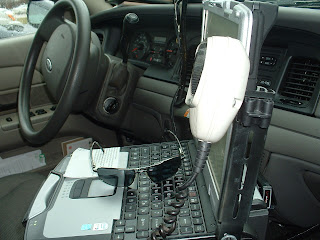 Computers were down for half the trip. 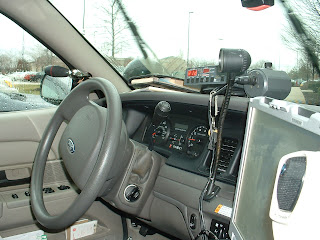 Mom had a great time! It was a lousy, rainy, cold day. Each policeman is assigned to a beat. John's beat is beat 9, the beat where Mom's work is. That was way cool as she knew the area very well since she's worked in it 19 years so he really filled her in on a lot. First call was a minor accident. Then helped get another accident out of a busy road that was the dividing line of our beat and another. Then they just drove around checking things out. Pretty boring. Mom kept saying she wished something exciting would happen. Then a call came in for another boring accident but we were pulled off that right away and sped with the lights and sirens on (whoopie!!!) to Woodfield Shopping Center where there was a report of a 17 year old girl who had taken 14 Triple C pills and had smoked some marijuana. We were looking for a white pick up truck with a cover and knew the license so we drove up and down the parking lot over by Macy's. Finally mall security spotted her and she wouldn't stop for them so again we put the siren and lights on to get there. Another cop tested her eyes and said she was definitely on something and then they put her in the back seat of MOM'S squad! She was so afeared the girl would talk to her but she didn't. She then got on the phone with the friend who reported it. They searched her car and purse. But they had to transport her to the ER because of her age to check her out to be sure. So we followed the ambulance to the hospital because John had to get the name of the doctor who was going to see her. Then we were able to leave and he drove Mom back to the station to get her car since her four hour ride along was over. What also was way cool was that they didn't know what Triple C was so Mom said it's probably slang for some drug and suggested John get on the internet and do a Google search and it was there! It's some sort of over the counter cough and cold tablet that causes a high when ingested in large doses. We were so proud of Mom that she thought to do this!


Posted by Laila and Angel Minchie at 8:50 AM