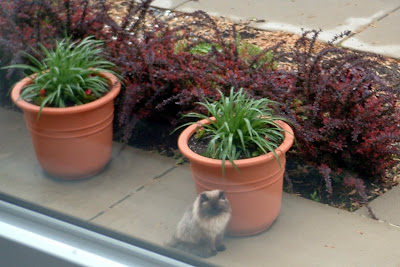 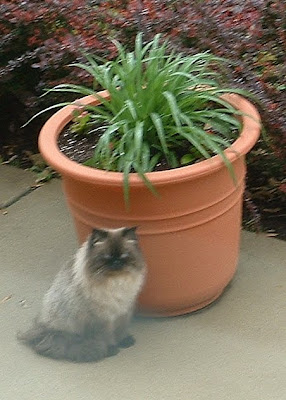 Look at the tail on this guy! Meet Samson, one of our neighbor's kitty, who was our sister Cerise's(RIP) boyfriend. His owners let him come and go but he never strays off their patio. Mom took this picture of him the other day when he came near the bedroom window to say hi. Then late last night, Mom was out on the balcony and saw he was still outside so she got dressed and went down to see if he was locked out. Their screen was closed so Mom went in and knocked on their front door to tell them Samson was outside. Sure enough, they forgot he was out there and brought him to the door so Mom could see and pet him. She was in heaven as he was all over her and purring and meowing up a storm for her while she petted and talked her kitty baby talk to him. Being that he is a boy, he's much darker than Cerise(RIP) was. Mom was so tempted to snatch him up and run away with him.

Posted by Laila and Angel Minchie at 7:03 AM