Today's flashback is from July 2008, Minchie's third day with us 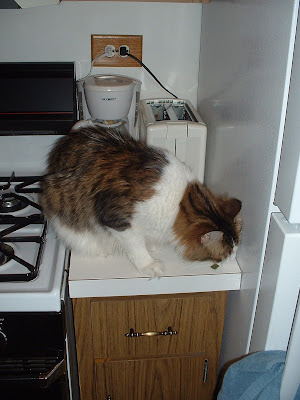 WOW! First thing mom does when she gets up is give us our breakfast treats. Not bad! Think I'm really gonna like living here! 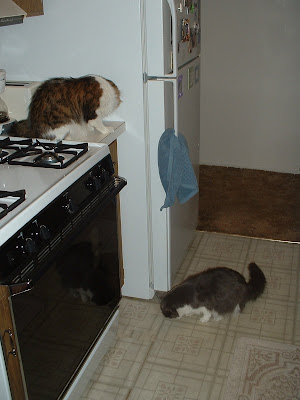 Laila had already scarfed down her treats and was such a big help taking care of the ones I dropped on the floor.

Mom here. It went well last evening. Some hissing/growling mostly on Laila's part, but she's just telling him like it is and she's the alpha kitty here. Once in a while Minchie talks back to her. Decided to leave the bedroom door open and it went very well. Didn't hear any horrible cat fights going on. A few times woke up and Minchie was conked out on the bed with me. Laila generally doesn't come up until around 5:00 am so when she did there was a little hissing then, but it went well considering they've only been around each other less than 48 hours. I'm so happy Minchie is here and he's such a love. It won't be long before the two of them will be bonded forever. Last night I was in the recliner watching tv and he was on my lap. It was hysterical! He was sort of laying on his back with his legs up in the air and looked just like petrified road kill! I couldn't stop laughing! Where's a camera when you need one? I'll be sure it's next to me in the future when I sit there.
Posted by Laila and Angel Minchie at 7:05 AM