Today's flashback is from October 2011 and was titled:
MEET PEGGY SUE ﻿

Mom is taking over the blog today to tell about the little kitten she rescued yesterday afternoon. 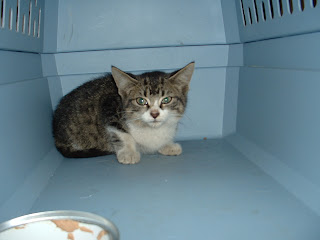 Her paws and belly were pretty dirty from crawling around the engine of that SUV.  She ate that entire can of stinky goodness Laila and Minchie donated. 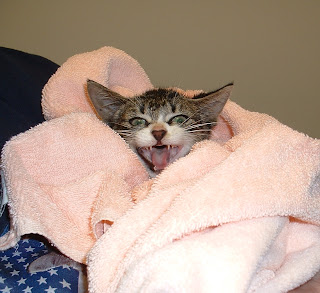 Peggy Sue giving me a big smile for the camera after her bath. 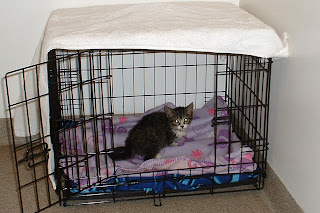 This is her bed in the isolation room they have her in.

This is the little 8 week old kitten I rescued with the help of our maintenance man and a neighbor. She was loose in the underground parking garage of my condo building and ended up inside the engine of a huge SUV. I was getting her all set up in a huge box in the bedroom until I could get ahold of Laila and Minchie's former foster mom, Sue, who runs the cat section of The Buddy Foundation.  She said they'd take her! I got to help give her a bath and got to towel dry her. I named her Peggy Sue. Peggy for me and Sue for Laila and Minchie's foster mom who did the intake on her. She has to stay in an isolation room until she's checked out by the vet next week.  Then I can go back and visit her when she's put in with the general population of kittens and will get more pictures then.  Oh, and she only weighs one pound!

I was so lucky they took her but because I'm a supporter they didn't hesitate.  Whew!  She was not afraid of me and I was quickly bonding with her.  When I was towel crying her she was purring up a storm and at one point was licking my neck.  I miss her so much but they will have no trouble finding her a great forever home.  Sandy, the neighbor who helped me, even offered to pay half of her expenses if I kept her.  She has four big birds so living with her was out of the question.  It's just too crowded here for three kitties.


Posted by Laila and Angel Minchie at 7:43 AM