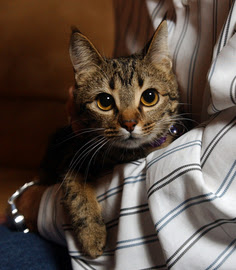 PALM BEACH GARDENS, Fla. -- Some kitty math: How many lives did little tabby Gracie Mae use up when she crawled into her owner's suitcase, went through an airport X-ray machine, got loaded onto a plane, thrown onto a baggage belt and mistakenly picked up by a stranger far from home?
"She's got to be at four or five now," Seth Levy said after his 10-month-old pet was returned Sunday by a kind stranger who went home to Fort Worth, Texas, with the wrong bag and Gracie inside to boot.
The last time Levy's wife, Kelly, saw Gracie was before she took her husband to the airport. The 24-year-old went back to her house in Palm Beach Gardens late Friday to find the bottom step, where Gracie would usually be waiting, empty.
She tore the house apart looking for the cat, who had been spayed just days before. She and her dad took out bathroom tiles and part of a cabinet to check a crawl space and papered the neighborhood with "lost cat" signs.
Then she got a phone call.
"Hi, you're not going to believe this, but I am calling from Fort Worth, Texas, and I accidentally picked up your husband's luggage. And when I opened the luggage, a cat jumped out," Kelly Levy quoted the caller saying.
Rob Carter said he made it home with the suitcase before realizing it wasn't his -- and there was a big surprise inside.
"I went to unpack and saw some of the clothes and saw it wasn't my suitcase," he said. "I was going to close it, and a kitten jumped out and ran under the bed. I screamed like a little girl."
Carter said that he eventually was able to get the cat to come out from under the bed.
"In the morning, I got close enough to see its collar and the phone number on it," he said. "So I called the number and got a hold of the crying wife of the traveler."
The tabby made the 1,300-mile trip home on an $80 plane ticket. Carter said he considered keeping the cat before he knew she had a home.
"We were going to name it Suitcase," he said.

Well, we are a very unhappy bunch of kitties. Mom is abandoning us again! She says she'll only be gone one night so I guess we can somehow manage. She got invited to attend a Creative Memories scrapbooking regional convention at a local resort. This can only be bad news. She'll probably be raiding our food/toy fund to finance new products in the coming months. Boohoohoo!

Posted by Laila and Angel Minchie at 1:23 PM